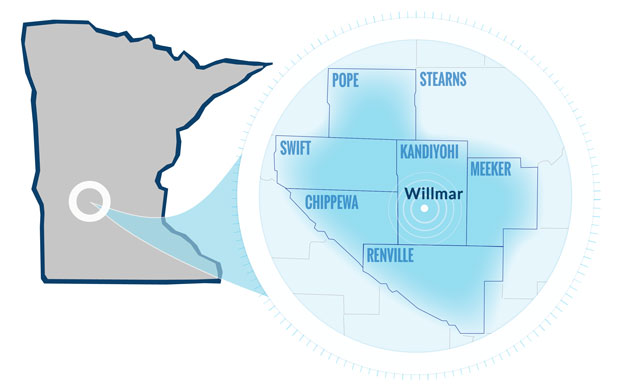 Economic Development Commission (EDC)
to promote economic development activity by attracting new businesses, assisting with
expansion, retaining existing businesses, and promoting rehabilitation and/or redevelopment of areas within the community. The EDC plays a critical role in advising and making recommendations on all economic development matters in Willmar and Kandiyohi County. The EDC’s mission is to be a catalyst for economic growth, and we are “open for business!”

Located in the heart of West Central Minnesota, Willmar has connections to the busiest north/south and east/west railway. The City boasts not only an expansive shovel-ready industrial park but also a thriving technology park on a historic campus. “Although Willmar has a diversified economic base, agricultural production and agri-business are the chief industries of the City and surrounding area. Willmar has also established itself as a regional center for medical/professional/financial services, education, government, transportation, and wholesale and retail trade” (City of Willmar Comprehensive Plan).

Willmar has the fastest growing diverse population outside of the Minneapolis/St. Paul area; you will find a multitude of diverse small businesses downtown and throughout the City. Willmar was designated an All-America City in 2005 and is a designated Main Street community.

How do Tax Abatements compare with TIF?

Both Tax Increment Financing (TIF) and Tax Abatements can be used for similar purposes, rely on property tax funding, and have very similar bonding powers. But, they differ in the following ways: